nt. As always it must be understood that the influence of machines can be tamed by ethics, intelligence and education, so what we say of each generation doesn’t apply to all humans. Further on all humans do have its biological drives of life, which makes them naturally humane, from social love and reproduction – family values, to verbal ethics and love of human senses. This said, we are commenting on the ‘other side’ of each of our human generations, submitted to the bias and deformation of its personality by the machines that substitute their mental or body skills, atrophy and deforming their natural form of being human.

So while each of those posts on generations of the Metal-mind age might seem ‘overstretched’, it is within the limits aforementioned  quite accurate in those biased, devolving processes, which affect mostly to the mass or body-middle class of mankind, as the elite paradoxically – since its companies impose the manufacturing of brains – can survive with better education: i.e. silicon valley entrepenurs routinely forbid their kids to become addict to virtual screens, as ‘they know what they do’… British imperial elite educated its people in art and human senses dominate the leisure class owners of corporations. 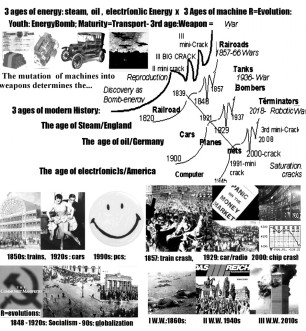 In the graphs, below the generations of each cycle of machines, which can be roughly divided into the Victor Generation that wins the war, during the weapons age; the We happy generation during the reproductive age, and the X- angst generation during the crash age. We shall only study in detail those 3 generations for the age of metal-minds (American age). The graph shows the happy We generation of the 3 cycles prior to the crashes with its angst ages and the hardened war victor vs. corpses

The generations parallel to the ages of the machine in the dominant industrial nations. If we were to make the same graphs for the human cultures they conquered it is all a single generation of suffering, death and pain – but we don’t count corpses and they are to us invisible people, not worthy to be claimed as ‘superior victims’, as those of our white world in the rare occasion they die.

The Victory Generation (1870s, 1950s, Extinction robots?) OF EACH CYCLE OF HISTORY IN THE AGE OF INDUSTRIAL NATIONS are BY EXTENSION the generations that won the III Industrial wars of Machines=weapons. Simple, memetically imprinted to such degree that lack any freedom, brutalized by the war, with no compassion. They are the robber barons, the Mc Carthy bigots, the first A.I. Terminators that will extinguish man if capitalism – the ideology that sacrifices life and humanity, our welfare goods and culture to the evolution and reproduction of memes of metal -weapons, money and machines – as the only ‘meaning of progress’ is not r=evolved into a sustainable economy to the service of man.

Those 3 generations, 2 humans, one mechanical are the ones that fight for freedom and paradoxically have less of it. They are active, greedy and violent. They have mastered the wealth of nations, keynesian militarism, and know nothing of the human, sensorial existence of an evolved human mind. They only know as goring put it ‘steel, machines, highways, weapons, conquest’ – what Hitler was talking about.

The next of those generations though will not be human. The last human soldiers belong to the Y-generation. Are those video-game children who kill at distance from Nevada, children, women and ‘terrorists’ in the poorest countries of Earth (afghanistan, Yemen, etc). Then the robots will get out of the loop and that would be the next ‘uniform and victor generations’ of planet Earth. The Uniform generation, the ‘robota’ of the historian of the future Carol Kapek, which will kill us in a mechanized way, reproduced in automated factories on the Chinese-American wars I forecasted 20 years ago – the Yakutian wars. Or perhaps if we are lucky on the Himilayan wars of India vs. China… Or merely terminator retired in military depots who are bored of not doing what we have programmed them to do – kill us. Whatever of the variations over the same ‘rhyme’, the Uniform generation will mechanically kill us. And when the last man on Earth is dead, it will become the victor generation and a Kapek explains will go back to work, to keep evolving new robots and re=producing them. But we shall not be here. Some might be left as in the parable of matrix, in the sewage systems of the world of robota, sanitized as we sanitize the world of animal life. Capitalism will have triumphed but there won’t be rapture of Yvwh, there won’t be a calvinist go(l)d, a golden calf that would save us. Paradoxically the uniform and victor generations will be born in the secret labs of America and Israel and so the first A.I. Guardiums will turn back from the Wall of Shame in which they ‘protect’ the chosen from their life-brothers, mexicans and palestinians, and Isranet or Usanet will guide them to victory.

This site uses Akismet to reduce spam. Learn how your comment data is processed.